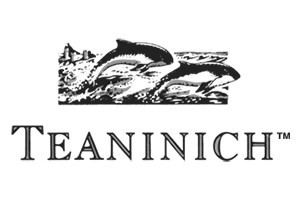 Label mentions: "Cromarty Firth is one of the few places in the British Isles where porpoises can be seen. They can be regularly sighted swimming a few miles from the distillery. Founded in 1817 in the town of ALNESS, the distillery is now one of the most large in Scotland. Teaninich is a blunt single malt with an aromatic, smoky and satisfying taste. "

Long ago, Teaninich was a kind of two-headed distillery.
In 1962, in response to the increase in demand, its production capacity was doubled and it began to use four pot stills instead of two. In 1970, a new production unit "side A", containing six new stills, was built next to the old unit, which became known as "side B". "Side B" was closed in 1984, with "side A" following in his footsteps only a year later.

In 1991, modern-day Teaninich became operational again. Since then, two official bottlings have been released: the first, a 10-year single malt, was released as part of the Flora & Fauna range, while the other as part of the Rare Malts collection.