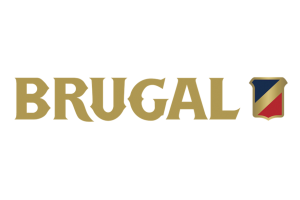 The bond between Brugal family and the Dominican Republic began 5 generations ago, in 1888, with the foundation of the Don Andrés' Distillery.

Today as then, the family is engaged in the production of Ron which sees its entire production cycle within Dominican territory since the selection of the raw material up to the bottling.

The ingenios of La Romana and San Pedro supply the molasses to the distillery and the cane used for the production of sugar, all Dominican, comes exclusively from the eighty thousand hectares cultivated locally.

The role of maestros roneros, Jassil and Gustavo, plays a decisive role in the aging phase: they are responsible for checking that the 250,000 barrels, in a mix between ex-bourbon in American white oak (90% of the total) and ex-sherry in Spanish red oak, produce a liquid that is always the same.

Part of the plant's energy needs is met by a biofuel produced using the waste that distillation has produced, significantly reducing CO2 emissions into the environment.