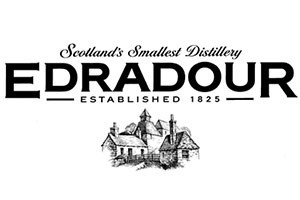 Edradour is known as one of the smallest traditional distilleries in Scotland.

It produces only 90,000 liters a year, the quantity that one of the largest distilleries produces in a week.
Currently the distillery has a cast iron mash tin, two Oregon pine washbacks and two pot stills.
Since 2004, it has sold a series of single malts in 50 cl bottles, finished in barrels containing different wines or distillates.

Its history is quite troubled, we list here some historic stages of the distillery:

1825 - This year the creation of a distillery called Glenforres, by some farmers from Perthshire, is traced.

1837 - It is the first year in which Edradour is mentioned.

1922 - William Whitely purchases the distillery to be able to produce its blended whiskies. The distillery is renamed Glenforres-Glenlivet.

2002 - The Edradour is bought by Andrew Symington on behalf of the Signatory Scotch Whisky.